Through the Lens of a Lawyer – Interview with Rajdip Ray, Filmmaker & IPR Attorney 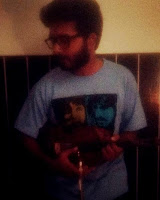 Sourya: How do you generally introduce yourself to people who don’t know you? A lawyer, a filmmaker, or both?
Rajdip Ray: A factotum. I was working as an IPR lawyer till earlier this month. Currently, I’m assisting the director of a feature-length independent film. Next month, I’ll probably be doing something else.

Sourya: Was Kolkata, with its rich heritage of art and theater, where you first discovered your passion for filmmaking? Or did your love for movies come at a later stage of your life?
Rajdip Ray: My love for films developed considerably late. Maybe when I was in Class 11 or 12. I went to the cinemas and watched films on weekends, but that’s what pretty much every regular kid does. Sometime in high school, I watched The Pianist by Roman Polanski. For the first time I appreciated cinema for the beautiful medium that it is to tell a story; and not merely as a means of entertainment. DVDs were in fashion then. Especially, pirated ones which were cheap and came in 5-1 or 6-1 combos. That’s how I ended up watching Satyajit Ray, Hitchcock, Woody Allen. By then, I was hooked on to how a film could be used as a medium to tell a story.

Calcutta, of course, had a part to play. It’s a city with a soul. But it was more towards developing an intellectual and scientific temperament, and sense of culture overall, rather than film in particular.

Sourya: What influenced your decision to join a Law school?
Rajdip Ray: I studied humanities in school. Chemistry I believe is one of the worst things to have happened to mankind. Nuclear weapons and atom bombs would not have existed if no one pursued chemistry. I was a decently good at studies; but horrible at chemistry. So science was never an option.
And I did not want to be a commerce student.  So arts. And law was one of the more prominent career options. That was also the time I had started reading John Grisham and had read each and every single book he had published till then. And no one writes courtroom dramas like Grisham. Since I was a debater and liked talking, one thing culminated into another, and before I knew it, I was writing law school entrance exams.
I did try studying media immediately after college, but that turned out to be an utter waste of time and money.

Sourya: Were you involved in theater/filmmaking etc even during your Law school days?


Rajdip Ray: I started filming at the end of my first year in law school. I had bought a DSLR and wanted to put it to use. I had been writing stories for a while, so I attempted to write my next story as a script. And then I shot it, with a handful of people as part of the cast and crew. My first film, ‘What She Said’ was made on a budget of 600 bucks, which included a drink we had to buy at CCD since it was required for a shot.
It got selected by Shamiana- Asia’s biggest short film club and was screened in Mumbai, Pune, and Kolkata, along with some Oscar nominated shorts. The Mumbai screening was at Eros Cinema in Churchgate. And it was really thrilling. The Bombay people really loved it. Especially when they found out about the budget in a post-screening QnA. In Bombay, 600 bucks will buy you one drink at a bar. Two, if they have happy hours.
That was the first time I watched a film I had made on the big screen. It was the most exciting thing to happen to a nineteen-year-old. Growing up, making your film and watching it in a cinema hall always seemed like a dream which seemed a bit too far-fetched. Like driving a Formula 1 car. Or playing cricket for India with Dada and Sachin. Every kid dreamt of it. But very few thought they might actually they get to live it.
That prompted me to go ahead and make my second film – Keu Eshe Bolechilo / Images – which was my first film to compete at national film festivals, and won a couple of awards while it was doing the rounds.
And once the film bug bites, it keeps itching forever. So I kept filming till the end of law school whenever I got the time. I had to give up on some prestigious internships which would have made my legal resume shinier, in order to keep filming. And given the opportunity, I’d do it again.

Sourya: At any point during your law school years, did you ever consider dropping out of law and making movies?
Rajdip Ray: Every single day.

Sourya: Tell us about your experience as the Associate Director of The Other Way.
Rajdip Ray: In 2012, two of my close friends, both twenty-year-olds, decided to make a feature-length documentary film, an absolutely ludicrous idea at the time. And they chose “independent films and their making in India” as the subject for the doc. The three of us were also actively writing for dfuse.in, a counter-culture e-zine, where I handled the films beat. When I figured there was a chance for me to get involved, I jumped in. Because of budget constraints, the directors themselves couldn’t travel all over the country. So I helped out with some of the Calcutta and Bombay shoots. And it was a brilliant, brilliant experience for a young film enthusiast. Here I had filmmakers like Onir, Q, and Sandeep Mohan in front of the camera, people who I admired and idolized, with me behind the camera.
One particular incident stands out in my head. After shooting with Q till 3 am in the morning when we were wrapping up the shoot, Q pointed out that the sound recorder hadn’t been turned on. I was the one handling it. I had pressed the “Record” button, but it needed to be pressed twice in order to start recording. It was a rookie mistake, and I kept cursing myself thinking I had messed up the entire shoot. Thankfully, we had shot indoors at night with minimum ambient sound, so the camera sound was ultimately used. Since then, I keep checking multiple times whether both camera and sound are rolling before calling a shot.
Sourya: You also have your own production house known as Alt Ray Films, what would you say is it that you want to capture and show the world through the lens of your camera?

Rajdip Ray: Alt Ray Films is for my own directorial ventures, produced independently. So that’s four short films so far, and I want to venture into feature filmmaking soon. I think while telling a story, you need to touch a chord with your viewer. All the films I have loved have touched that chord within me- whether that’s Offside by Jafar Panahi, or Masaan by Neeraj Ghaywan. I’ve also tried making films on topics that bother me- lack of governmental attention to street children, increasing number of fatalities due to road rage. I hate being preachy. But if I can make people aware of realities through fiction, and make them think for 30 seconds after my film ends, I’d like to believe I’ve done decently.

Sourya: The success of which project/short film would you consider having been your proudest moment till date?
Rajdip Ray: As pretentious as it sounds, I have enjoyed being on shoots and the filming process, more than the end product being successful. All my shoots have been managed on a minuscule budget with a 2 member or 3 member crew at best, and it’s a huge task to get it right and realizing the original vision that you had in your head. So while it’s been tremendously challenging, it’s been a hell of a lot of fun, and extremely satisfying, every time I have ended up with a complete film!
Sourya: Has being from a Law school influenced the way you view the world through your lens and/or the way you tell your stories?
Rajdip Ray: Of course. One of my professors had once said “In every profession, you learn everything of something. In law, you learn something of everything.” And as a storyteller, you need to observe everything around you. The more you observe, and the more you know, the better your chances of presenting something truthfully and earnestly to the viewer.
Also, law school, and subsequently working at an IPR firm has given me a fair knowledge of copyrights, which is essential for any individual creating original content.
Sourya: How difficult is it, balancing a full-time job as a Trademark Attorney and chasing your passion of telling stories for people to see?
Rajdip Ray: Very difficult. Both are full-time commitments and require your undivided attention. And it’s pointless to do either of them half-heartedly.

Sourya: There would be numerous people around us, who may be stuck in Law school despite having the passion for something else. Writers, actors, singers etc, stuck in classroom chasing good grades and a high paying job instead of chasing their dreams. Would you have any word of advice for such souls?

Rajdip Ray: I am terrible at any kind of advice. So instead I’ll leave you with a quote from a letter written by one of my favorite writers, Charles Bukowski.

“My dear,
Find what you love and let it kill you.
Let it drain you of your all. Let it cling onto your back and weigh you down into eventual nothingness.
Let it kill you and let it devour your remains.
For all things will kill you, both slowly and fastly, but it’s much better to be killed by a lover.
~ Falsely yours”