Sense Of Security or Civil Rights :- An Analysis on the Paradox of Anti-Terrorist Legislation

Editorial Team 1st December 2013 Sense Of Security or Civil Rights :- An Analysis on the Paradox of Anti-Terrorist Legislation2017-08-15T12:51:32+00:00 Law & Policy No Comment
In the modern context
of our day to day lives on must come to terms with the fact that security is a
concept that is both misleading and superficial in nature. When we use the word
security one may have different conceptions of security be it physical, emotional
or even financial security. Over the years we tend to associate the security in
our lives as an obligation that the government needs to fulfill. At the very
least we expect the government to provide us a certain degree of physical
security to protect us from intrusion, assault, theft or any act that could be
dilatory to our lives as a whole. Now let’s consider this in coherence with the
concept of our rights. In India we have a plethora of rights the most important
of them the fundamental rights guaranteed under the constitution the right to
move, the right to reside in any part of the country, the right to form groups
and the right to free speech and expression. These rights give us a certain
power one may even say that these rights provide us with security. But the
truth is that security is unattainable be it in India where you have riots or
bomb blasts occurring on a daily basis or even in a country like the US where
you have instances like the Boston bombings or even in a country like Iraq
where drone attacks make the concept of security look like small child’s dream.
Notwithstanding the frequency of these individual events the fact remains that
now government can guarantee security what it can do is provide a sense of
security. The enactment of the PATRIOT Act in the US or the exponential growth
of their defense budget all contribute to one thing, instilling in the common
public a “sense of security”. It can be seen in speeches by politicians as well
during rally’s. The reasoning behind this is that this sense of security is
what drives public participation as well as public support. A simple way of
understanding this is by picturing a situation where any government that
couldn’t guarantee the security of its people has stood in power. Now that one
sees this provision of the sense of physical security as a government’s prime
function we have to contrast it with the security that arises from individual
rights perhaps they are both mutually inclusive. The rights are simply instruments
that give us the power to demand what weare already entitled to. Now in a post
26/11 era we still hear shouts regarding new and more stringent anti-terror
laws and their aim is in totality to promote the very sense of security which
is at the end of the day a government’s prerogative. The burning question is
what does a government do when you enact a legislation that goes against these
rights yet looks to promote security which in turn indirectly supports these
rights. This is the paradox that one is confronted with when dealing with
anti-terrorist legislation. The Anti-terrorism legislation designs various
types of laws passed in the aim of fighting terrorism. 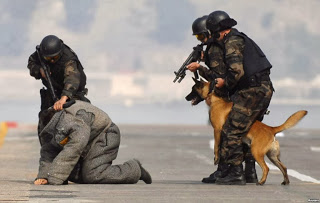 They usually, if not
always, follow specific bombings or assassinations. Anti-terrorism legislation
usually includes specific amendments allowing the state to bypass its own
legislation when fighting terrorism-related crimes, under the grounds of
necessity. Because of this suspension of regular procedure, such legislation is
sometimes criticized as a form of “loisscélérates” which may unjustly repress
all kinds of popular protests.  Then
rises the question in focus can any there be an sustainable model in which both
rights and the sense of security can mutually co-exist. In USA post 9/11 there
was widespread support of the PATRIOT act however in a few years after its
enactment people started protesting against unlawful detention under the act,
evasion of privacy and absence of government accountability owing to lack of
transparency which were seen as a violation of rights guaranteed under the
constitution of the US. The obvious answer given in reply to it was “national
security” which brings us to the paradox of anti-terrorist legislation. Niccolo
Machiavelli said that when citizens forget about the destruction wrecked in the
past and the tools to stop it then are used against the people to suppress
them. Then only two outcomes are possible either the state becomes a tyrant and
people are forced to rebel or people continue to protest till and the state
obliges, subservient to the will of its people. Though the latter may seem more
desirable in truth it puts the state back into a vulnerable position and there
arises the question once again is the sense of security more important or are people’s
rights? One may state that in the absence of the sense of security anarchy may
ensue making it impossible to enforce any rights at all. The other side may
argue that when one begins valuing the common good more than individual rights
then it destroys the purpose of rights itself and a state fails in upholding
the ideals that stands on.  True that no
right can be absolute but at the same time is a right expendable? In India the
latest amendment to the Unlawful Activities (Prevention) Act drew the ire of
several sections of the public calling it draconian as it imposes restrictions
on various fundamental rights guaranteed under the constitution. The question
we must ask ourselves is whether any such law like the UAPA (amendment) or the
PATRIOT Act which is enacted in the immediate aftermath of a terrorist act,
which is by its very nature “ex post facto”, can be legitimate in the long run.
Does the need for public safety outweigh the fear of use or misuse of such an
Act?  Can we have safeguards to prevent
misuse or is the scope for misuse and its possibility in itself a disincentive.
Are these thoughts even considered when making such legislation? The major
issue in such situations is the need to go extreme and unwillingness to find a
middle ground where both can be attained. Yes the governments may say security
is of the utmost importance but by enacting legislation that is
counterproductive to the concept of individual rights itself a form of
terrorism that a state inflicts on its citizens irrespective of motive. By
oppressing its people through such legislation is the government fulfilling the
goals of the terrorists themselves? Some would argue that not enacting strong
legislature which in turn makes people vulnerable to such attacks in the first
place. Both situations may come across as lose-lose situations, but that
doesn’t have to be the case, the solution lies in finding a middle ground
between these two extremes many point out the reinforcement of local law
enforcement institutions rather than creating new ones others point out to
better training of officers to handle these events. Perhaps it is a hard task
but it is still up to us to decide if we want to strive for a balance or oscillate
to an extreme.

« Rethinking Nationalism with the Poor
Defining the Nation and Interpreting History »