“My Country”- Right or Wrong?

admin 2nd December 2013 “My Country”- Right or Wrong?2017-08-15T12:50:17+00:00 National No Comment
I
am reminded of a parable of Mencius, the disciple of Confucius. If a child were
on the brink of falling into the well, we spontaneously reach out to save it.
And this is not done to win public acclaim or to merit the gratitude of the
parents of the child. It is simply something which our humanity deep down
within us impels us to do.
Affluence
creates a weak person and a fragile culture. On the other hand, the
confrontation with human suffering and response in terms of compassion has
developed in the victims some of the values we require to sustain a different
world – solidarity, humaneness, the spirit of sharing, technique of survival,
readiness for risk-taking, endurance and steely determination in the midst of
adversities. In the world of the victims, unlike in the world of globalisation,
the good does not get identified with the “successful”. The good and the just
are the ideals the world needs to relentlessly strive after.
There
ought to be a moral restraint on nationalism. This is not only because of the
violence, oppression, war and destruction an emotionally charged national
chauvinism could cause to others who do not belong to the nation, but also
because of the oppression nationalism could cause to the poor and the weak
within its own boundaries. 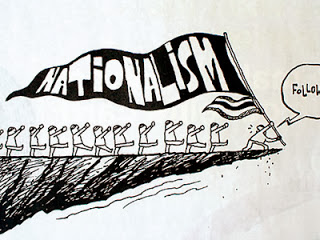 One
of the unfortunate things we are witnessing today in global politics is the
absence of even a modicum of ethics and moral consideration. The Chanakkiyan or
Machiavellian approach to power and expediency seem to rule the political realm
under the guise of nationalism. The primary way of practising ethics in the
ambit of politics in general and nationalism in particular is transcendence and
openness. The ‘religious’ character with which nationalism is vested could
blinker the vision and call for allegiance of the people for violence, crimes
and inhumanity. There will be no hesitation to resort to ethnic cleansing, in
order to uphold the ‘nation’ and its interests. Under the label of
“anti-national” or “unpatriotic”, critical voices that awaken a nation from the
nationalist passion to reason and sobriety, could be stifled. Like Noam Chomsky
there are, fortunately, men and women in every country who critically challenge
an uncritical and anti-humanist nationalism.
The
secular ideal of democracy is often procedural and formal. If democracy is the
prevalence of the will of the majority in governance, then this is a very
dangerous conception, since under the cloak of democracy what would happen is
the “tyranny of the majority”. Rightly did John Stuart Mill in his time raise
the critical question, “how could a minority be free when it is forced to
conform to the will of the majority?” The institution of formal democracy could
co-habit with religious nationalism of the majority. In this way, religious
nationalism becomes even more dangerous, because it can easily wear the democratic mask to impose itself on
the rest of the identities in a polity. All this shows a mere liberal and
secular nationalism alone cannot respond to the issue of diversity and
plurality of identities.
This Article Is A Part Of The Utopia Series. Utopia is not an unreal figment of imagination, or a chimera we chase in futility. It is the projection of another real order of things, a different set of values, and a new shape of the world and society. The suppressed identities, women, minorities, Dalits and tribals and all those who are marginalised in any way project their utopias. Utopia leaps out from the shoulder of may struggles to glimpse and experience the new and the different. Critique is indissociable from utopias.
Collected & Contributed By-