Imagining a World without borders: Interview with theater actor and traveler Akram Feroze 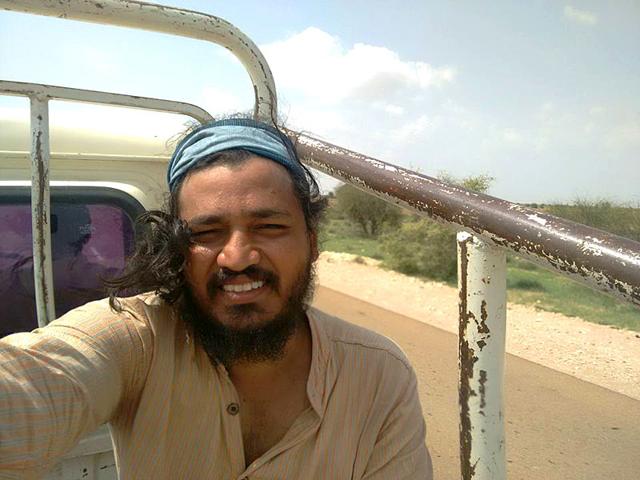 Theater actor-director and traveler Akram Feroze, believes in a world without borders, carries a world passport – as part of a global movement established under Article 13(2) of the Universal Declaration of Human Rights which says “everyone has the right to leave any country, including his own, and to return to his country” and  has been on the road constantly since 2009. Akram has bicycled, hitch-hiked, trekked, and walked almost 32,000 kilometers across India.

Alifiya (A): How do you generally introduce yourself?

Akram Feroze (AF): I am Akram Feroze. I am a traveler, an adventurist, theater actor, an invisible theater specialist and a storyteller. For the last 10 years, I have been doing multiple things from being a corporate trainer to being a community engager and a motivational speaker. So, I have been doing different things but if you ask me I’m someone who is trying to experiment with life, create some values, investing my believes and philosophy, how I perceive my life. I think this is who I am.

(A): What inspired the beginning of your journey?

(AF): Well, when I started I was trying to explore to find out what did I want to do. Like, in India, we do not have this culture of trying to explore things as soon as you’re done with college and you go travel. Travelling is also limited to a short period of time. I wanted to have the experience to see things, realize it and feel it.  So, though I’ll take a year-long journey and I was working at a TV channel by then but, I had to quit my job. I was trying to explore new things and I thought traveling can help me understand things better. Slowly, during the journey, things changed and now there is a lot more motivation to what I had started 10 years ago.

(A): What are the challenges faced during these trips?

(AF): Well, the physical struggle of cycling, the uncertainty in hitchhiking, there have been times I have been beaten up, there have been times I ended up without food, times I have been imprisoned so there have been different challenges. But, the major challenge is how do you keep yourself mentally fit in circumstances which can provide you with very uncertain situations, you do not know what happens. I think this has been a challenge to constantly to be on top of your mental status no matter what happens and when I continue it, be calm, to not react to it, find a way to handle the situation better, I think that is the biggest challenge, it not easy. The second thing is you know you are on a long trip, 6-7 years of continuous travel, you need to learn how to channelize your energy, channelize your emotions which is the most difficult thing. We all crave for having someone close by but you are alone for a long period of time so you need to find a way of how do you channelize your emotions.

(A): You were arrested and detained by the Jaisalmer Police in 2015. Could you tell us what had happened?

(AF): So, I was on this trip called ‘Theatre at Borders’ where I was traveling from Kutch to Kolkata. The idea was to explore borderline villages, understand the life in those regions, what do the people perceive about the idea of a border, perform theater or invisible theater in those regions. So after 2000 Kms down the line, they suspected I was a terrorist or a spy. That complicated issues because of my previous travels and it led to an uncomfortable situation. The most important thing was I believe in a world without borders, I believe borders over a period of time if not now maybe,500 years down the line the world should dissolve its border and try to find a common way of living together. So, this was the whole idea of reaching out and understanding border life. This was something not easily understandable in prison circumstances to anyone and that led to my prison episode.

(A): What message are you trying to spread?

(AF): We need to ask ourselves to find a way to bring communities together beyond borders. We have struggles, we have issues with gender, environment and these are not country-specific issues. These are global issues people who are struggling in one country also have issues in another. We need to solve these problems commonly. Yes, there is a local solution but we need to find a common similarity and become  together and say look we are human beings we are struggling through different times but we need to come together find a way around and move forward. And that can only happen if we dissolve borders if we have people exchange between countries n a lot of things happen because of not knowing info not having enough exposure to different places, cultures and this adds to a lot of pressure. Why do we get only globalized solutions? It’s because of people no idea about what should be done because they haven’t traveled and have never seen that life. Until and unless this exists we are never going to be solving global problems in a localized manner. For that to happen we need to find a common entity. I believe borders have created wars. We don’t fight within a nation in the same way we need to find one common identity of world citizenship and that will happen it might take time and people might think it’s very idealistic as people might think. It’ll be a slow process but 500 years down the line we are going to find a common way.

(A): What all places have you visited till date?

(AF): I have traveled extensively across India. I have visited Andaman, Lakshadweep, Kashmir, Rajasthan. You can say I have visited all the states and there are very beautiful places with different cultures and food habits. Yet, people are together.

(A): What are some of your most treasured travel memories?

(AF): I think when I started my journey I didn’t have enough money. I had 500 bucks in my pocket. The first year of my travel was the most beautiful because I didn’t know what to do, where to eat, what do I eat or how would people help. I had no idea but, the initial part of it, everyday someone fed me even if I didn’t have money. I think those were very beautiful gestures.

Another incident was when I was in Andaman and I had an accident. I fell 20 ft. down the cliffs and I was in a bad shape but the local villagers helped me out, took me to the doctor, it happened in a completely isolated road. They took care of me and that is a really beautiful memory to have.

« The CLATaclysm of a Legal Exam
In Service of the Goddesses: Interview with Swarnima Bhattacharya, Founder TheaCare »