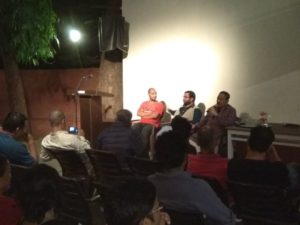 While the Country was busy Celebrating Teachers Day, and Hyderabad had a complete shut down of traffic due to Ganesh Idol immersion, certain citizens instead choose to take part in a different kind of immersion- an immersion into history. Or history as we are currently taught, that is.

Mr. Gopala Krishna AB, had taken the initiative and organized a moderated Debate on “Who won India’s freedom: Subhas Bose or Mahatma Gandhi?“. The open debate, which took place today (September 5, Tuesday, at 7 pm) at Lamakaan, was presided by the panel of journalist and writer, Mr Kingshuk Nag, and novelist and columnist Mr. Sriram Karri, who were to represent the For and the Against of the issue respectively. 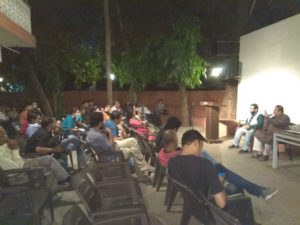 While answering the question of whether India won Independence because of the non-violent movement led by Mahatma Gandhi and Congress or was it the impact of Subhash Chandra Bose’s Indian National Army, Mr. Nag stressed that had it not been for the Indian National Army, the British Government would not have distrusted the regular Indian forces and decided to quit India. He emphasized that the Quit India Movement had failed and hence the British leaving India was a clear consequence of the actions of Netaji. 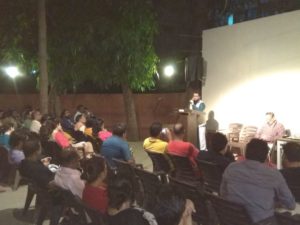 Mr. Karri, while not denying the importance of Netaji’s contribution, stated that no one person or group got India its independence single handily and it was a collective effort from 1857. He stated that in the greater picture of things, the contribution of Gandhi would be greater than that of Netaji, as Gandhi did not only want India to be free at any cost, he wanted an India which was ready to be responsible with its freedom. He stated that the British left cause after World War II, the British citizens were tired of conflicts and wars and had possibly made them realize their wrong in holding colonies, which they made clear through their vote in the elections.

The session was followed by a Q&A during which members of the audience were invited to ask both the Panelist questions, which was followed by an impromptu session of Lamakaan’s famous chai and samosas, which brought the event o a close.

Of Love, Loss, Grief, and Vengeance: The Last Of Us Part II Review