On Monday, 28th of August, Men Rights Activist NGO, Men Welfare Trust, filed an intervention application before the Chief Justices Court in the Delhi High Court, before Acting Chief Justice of the Delhi High Court, Gita Mittal and Justice C.Hari Shankar. The NGO claimed that it wanted to represent and bring out some narratives from men’s point of view as the Petition concerned affected not only the Government but also Men. 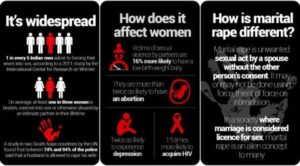 The NGO in its plea argued that laws were already in favor of women. It contended that as 498A (which deals with the offense of mental or physical cruelty by husbands or their relatives against a married women) already covered married women, they did not need another law in their favor under the rape laws. This essentially completely disregards the fact that offense under Section 498A is a completely different act/offense than that of marital rape. This argument is equivalent to arguing that as there is a law which protects a person from unlawful imprisonment, there need not be a law criminalize assault or battery.

Such comparison of the two separate offenses, in principle, also goes against another general contention of the Men Right Activists and the Center that marital rape can be difficult to prove. If MWT and the Center completely compare Section 498A cases with marital rape (going to the extent of stating that the presence of one reduces the requirement of the other), it also becomes clear that if Section 498A can be proved and its fake cases detected, marital rape can also be proved, and with sufficient legislative intelligence, fake cases stopped.

On Monday, the Centre also told the Delhi high court that if marital rape is brought under law, “the entire family system will be under great stress” and defended the penal code provision that protects husbands from being tried for the rape of their wives.

Quoting from Justice JS Verma committee report, the Centre pointed out “even when marital rape is recognized as a crime, there is a risk judges might regard it as less serious than other forms of rape”. The panel had examined the criminal law in the aftermath of the December 16 gang rape and recommended several changes in existing laws.

Merely cause Judges may regard it as a less serious crime, does not change the fact that it would at least in that instance be considered a crime.

The Centre has also claimed it cannot criminalize marital rape because India has its own unique problems due to illiteracy, lack of financial empowerment of females, the mindset of society, vast diversity in the cultures of States which implement the criminal law, and poverty etc.  The Centre has also claimed that it is necessary to implead the State Governments in the matter to know the opinion of these States to avoid any complications at a later stage. This is an unusual plea at this stage, as the Delhi High Court’s order would not be binding on other States in any case. Hence, unless the matter is somehow brought before the Supreme Court immediately, the current views of the other States, apart from the National Capital Territory of New Delhi is irrelevant.

The Center also stated that “if all sexual acts by a man with his own wife will qualify to be marital rape, then the judgment as to whether it is a marital rape or not will singularly rest with the wife. The question is what evidences the Courts will rely upon in such circumstances as there can be no lasting evidence in case of sexual acts between a man and his own wife.”  This argument by the Center actually betrays the Centers complete unwillingness to consider the removal of the marital rape exception as there are multiple other countries which recognize marital rape and have no issue whatsoever during trials. The Central Government admitted in its plea that marital rape is a recognized legal office in multiple jurisdictions around the world, but it claimed that India should not be compared to other “western countries” which have criminalized marital rape as our socio-economic conditions are different. This argument also betrays the Centers intention in light of the fact, that even countries like Nepal, which share our socio-economic structure and literacy levels to sufficient degree, have criminalized marital rape. Even countries like Zimbabwe, whose economy is in ruins, and Namibia, which gained independence in 1990’s, and Rwanda, which has far worse socio economic conditions than India, has criminalized marital rape.

It gets even more interesting once we consider that “sexual abuse” is a crime under Domestic Violence Act, 2005. So is the Center essentially contending that the judiciary can detect cases of “sexual abuse” in married couples but not rape/forced sexual assault?

The Acting CJ Gita Mittal assured that no one would be left unheard before she passed any orders.

Advocate Karuna Nundy who is leading the arguments for the Petitioners told LiveLaw that she will file the written submissions on the 29th of August. For the entire written submission of the Central Government check LiveLaw here.

In light of the Governments stand, Mr. Swaraj Kushal, criminal lawyer, ex Member of the Parliment (1998-2004) and ex Governor of Mizoram (1998-2004), came out in support against the criminalization of marital rape on Twitter, claiming that there is “nothing like marital rape”.

Only on that sentence of Mr. Swaraj. the author would agree. There is nothing like marital rape. It’s just rape. Plain and simple. Marriage doesn’t make murder or assault any less of a crime, so why should it marriage effect rape? 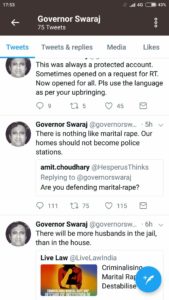 The organization Red Elephant Foundation has compiled immense resource, statistics and legal analysis here to explain the history, significance, challenges, solutions and the need to criminalize marital rape and make it a gender neutral offense. We highly recommend both supporters and those who oppose criminalizing marital rape to read all avaliable resources.

Architecting a Regulatory Framework for Cryptocurrencies in India