Editorial Team 9th February 2017 Climate Change, Resilience & Our Cities2017-08-15T11:30:34+00:00 Law & Policy No Comment
The Merriam-Webster dictionary defines resilience as an ability to recover from or adjust easily to misfortune or change. So what do cities – those commercial and teeming urban sprawls – need in the face of climate change, especially in the populous and rapidly urbanizing South Asian context? Some working definitions follow:

“A Resilient City is one that has developed capacities to help absorb future shocks and stresses to its social, economic, and technical systems and infrastructures so as to still be able to maintain essentially the same functions, structures, systems, and identity.” — ResilientCity.org
Chennai and Climate Change – Living Through Extreme Weather
Challenges to resilience experienced in Chennai, the fourth most populous metropolis, which is part of the 100RC experiment, include: aging infrastructure and its failure; economic inequality and poverty; extreme weather events; overpopulation, pollution, environmental degradation and civil unrest. Other Indian cities part of this effort to make urban centres sustainable are Bangalore, Jaipur, Pune and Surat.


Weather in Chennai which used to be classified laughingly as ‘hot, hottest, & hot and wet’ has now deteriorated with extreme variations within 24 hours. Add to this confused seasons. It’s now hot in ‘winter’, raining in summer and our monsoon alternatively floods or fails the city as well as India. We just got through the Tropical Cyclone Vardah which flooded streets, crushed city landmarks and uprooted over a 100,000 trees.

Our city’s lungs have been devastated even as air pollution reaches the winter peaks pushed up by burning cyclone’s debris. Drought is staring Tamil Nadu in the face as an unequal monsoon failed many states plunging them into drought and driving farmers to suicide.
Another joke about our city is that the minute the municipal authorities or road works decide to dig or lay a road that’s when there’ll be a cloudburst. Even with an underpar monsoon that urban legend lives on. Even the most moderate rains disrupt the city and its traffic. But when it’s heavy as witnessed during the Chennai Floods of November-December 2015 (which was the most rainfall in over a century) and the December 12th 2016 cyclone we have flooded homes and streets. The Chennai Floods damages were valued at $3 billion. So what we need is pre-emptive programmes similar to Lent, The Netherland’s 2006 “Room for the River” project which may have cost implementing a €2.3billion then but have saved the city from disaster payouts.
Hemmed in by the Bay of Bengal and three rivers – the Adyar, the Kosasthalaiyar and the Cooum – Chennai evolved and survived extreme weather because of its wetlands, canals, marshes and multitudes of lakes, temple tanks and ponds. There were natural water ways in place to channel flood runoff and absorb it into the water table for the dry season. Now the marshes have become landfills and the wetlands and water bodies been built upon schools, colleges, luxurious gated communities, the canals such as the Buckingham Canal which once was completely navigable has been choked by garbage and become synonymous with slums.
The concrete jungle that my city has become is perennially thirsty — exploitation of the water table and water quality is often brackish or worse. With the natural recharge venues choked and the water table sucked dry Chennai suffers from subsidence and has become more vulnerable to earthquakes. Past mistakes are repeated in this automotive industry hub by cycle of exploiting natural resources wherever it spreads to.
A repeated sentiment in various climate adaptation arenas and events is the fact that cities need to be at the fore of battling climate change. As Michael Berkowitz, the 100RC president puts it “After big disasters there are windows of opportunity,” and the time is to build sustainable cities not just smart cities.
Urban waste and water management, carbon decoupled transport and infrastructure, planning and having a vision for a sustainable future are key to urban resilience in Chennai and across South Asia. Training city planners and architects in the sustainable path could be the tipping point in reversing climate change.

What’s Essential for a Resilient City?
“The foundation of building resilience into a city will be the close working of the government and the civic society in developing capacities to deal with threats. I live in the city of Chennai, we the people here have set the benchmark in coming together — Government, youth, celebrities, business community, religious outfits, etc. – and coordinating efforts in dealing with the floods in 2015 and the cyclone of 2016.”
— U. Sudhir Lodha, Tamil Nadu State Minorities Commission Member

“The fundamental ingredient in building a resilient city is to resort to renewable energy and to rely on indigenous systems that do not augment the extent of pollution and exacerbate the impact of climate change. Making buildings capable of rainwater harvesting, installing solar panels, sensible disposal of garbage and relying on terrace gardens in an urban city can create resilient systems. Carpooling so that there are fewer cars on the road, reducing the use of air conditioners and relying on strong disaster management responses can go a long way.”
— Kirthi Jayakumar, Founder & CEO, The Red Elephant Foundation, Chennai
“Cities should ideally be supported by a social, economic and political framework that’s flexible in nature to support changing needs. With land as a prime resource in cities, high-dense housing is concentrated without taking adequate measures to check the availability of water, electricity, services, etc. Since haphazard development occurs without adequate planning, most South Asian cities provide bad living environments for people. Further, urban sprawl results in the creation of an unsustainable suburbia, the failed Western concept that is being tested in Indian cities currently. The sprawling populations that commute to the city centre in their private vehicles not only contribute to fuel exhaustion but also create massive traffic jams. Resilience comes from the ability to support massive change. The secret to build resilience into a city lies in the creation of a holistic infrastructure system; this includes providing effective public transport improving connectivity throughout the city, anticipatory planning of consumption of everyday resources and prevention of inhabitable slums in neighbourhoods. This can provide better life within cities.”
— Sivagami Periannan, Student, Masters of Architecture (Urban Design), Centre for Environmental Planning and Technology (CEPT), Ahmedabad, India

“Dhaka is a bustling city of nearly 17 million, the third most-densely populated in the world. Part of the world’s largest river delta, Bangladesh is extremely vulnerable to climate change. Confused seasons and monsoons have exacerbated desertification in more arid regions while the nation’s capital faces unprecedented erosion leaving what should be vibrant tropical flora and fauna chronically dust-covered and riders of CNGs and rickshaws getting a mouthful of dust in every ride, particularly in the winter.
To make Dhaka resilient, reduction of cars by provision of a public transportation system like an MRT and capacity-building of the related infrastructure could be one route to counteract climate change. Additionally, once in use, safety, particularly of women and girls needs to be ensured. In the developing world, building community trust for institutions is also critical to any efforts toward a sustainable economy and environment. The people of Bangladesh are a resilient lot, without a doubt, so hopefully once given the necessary resources, the present degradation in biodiversity and environment can be halted and reversed.”
— Mehvish Ally, Law Student and Red Elephant Foundation volunteer, American expatriate currently residing in Dhaka, Bangladesh

“Barcelona, Spain and Copenhagen, Denmark come to mind when I hear the term ‘resilience’.
A truly resilient city needs a responsive administration that plans for tough conditions in order to address the worse rather than getting directly affected. … small-scale sustainable planning strategies can be adopted to lower the risks and improve resilience. Setting up small-scale addressable goals and large-scale achievable goals at the start of every term of administration. There should be continuity in resilience planning when there is change in administration – a proper handover. It has to be associated with local government bodies and international partners.”
— Viswanathan S., Student Architect, Chennai, India
“It is important for civic authorities to engage in climate risk analysis and understand the likelihood of various hazards due to changes in the climate and engage with the different communities to adopt a more inclusive and integrated planning approach. This allows the government as well as the communities to understand the potential losses and plan adequate measures and interventions to potential risks. Thus, empowering communities with information and engaging with them to develop interventions from their experiences is key. Engage, educate and empower is central in making cities and communities resilient.”
— Sharda Vishwanathan, Volunteer, The Red Elephant Foundation, Atlanta, USA

“It’s really planning that’s strikes me as most essential, whether it’s to build a new ‘resilient’ city or to make an existing city more resilient. The only problem that lies in placing planning as a priority is that it is up to the planners to decide on what is a risk. But so long as a risk is not rejected out of hand, proper planning is the key to resilience. From determining the potential risks, to carrying through to making the necessary preparations, or just deciding on a course of action to take in the likelihood of the event occurring, all add a level of resilience. Only the planning aspect will show the scope of the problem, and it’s the first and essential step to be taken before considering any large project or social intervention as a measure of resilience.”
— Rukshan De Mel, PhD student, Disaster Management [critical infrastructure’s resilience to extreme weather events], Colombo, Sri Lanka

“The biggest issue in South Asia is the rate of urbanization. Considering the speed with which population in South Asia urbanizing providing incentives to bridge the urban-rural gap would provide resilience to stop infrastructure from failing.” 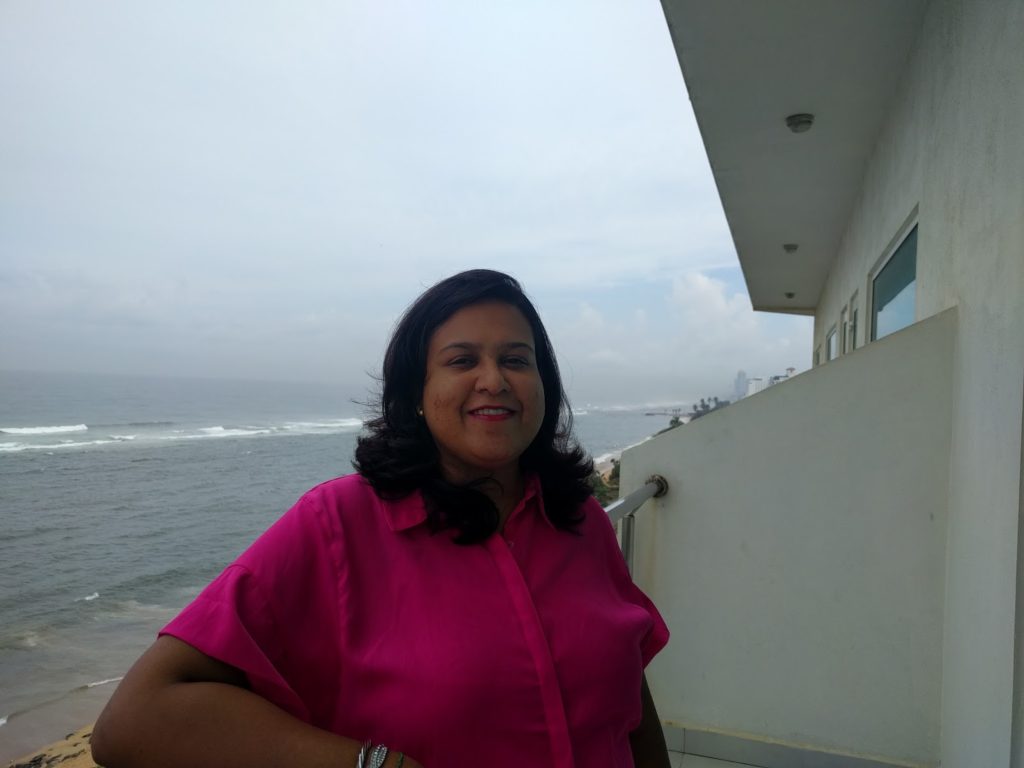 Raakhee Suryaprakash has a Master’s degree in International Studies and a Bachelor’s degree in Chemistry but is passionate about writing and researching ideas that change the world for the better. She was one of 15 South Asia Fellows in 2016 with Climate Tracker. An associate member with the Chennai Centre for China Studies, she also volunteers with the storytelling wing of the Red Elephant Foundation. Raakhee is in the process of launching a social enterprise SUNSHINE MILLENNIUM that aims to help India’s off-grid rural areas achieve the Millennium Development Goals by setting up of solar-powered millennium development centres. Her work has been widely published both in print and online media.

Organic debacle in Sri Lanka has policy lessons for India