Rohtak Gang Rape: Beyond The Outrage To The Law

Sourya Banerjee 18th March 2015 Rohtak Gang Rape: Beyond The Outrage To The Law2017-08-15T11:39:17+00:00 National No Comment
“Being disabled should not mean being disqualified from having access to every aspect of life.”
-Emma Thompson
We have read about incidents wherein a woman after being raped turned into a schizophrenic or developed some mental abnormality. What about victims who were already suffering from some mental ailment? Anything worse that could happen to them? The maimed body of a twenty eight year old mentally challenged Nepalese woman residing in Rohtak was found dumped in the Rohtak-Hisar Highway in the wee hours of February 4th. The heartrending account of her gang rape which lasted for three hours was picked up in the newspapers the next day. The nation was shocked yet again. This blood-curdling incident has once again raised an incessant demand for justice and equity.
The gruesome nature of the rape was such that the objects like long stick, condoms, stones and blades were pushed and impelled into her body. Not only this, she was attacked on the head and animals and rodents had already fed on her bits of her body before she was moved to hospital for autopsy. Such horrific incidents put forth several unanswered questions. The woman had been missing from February 1st, but the Haryana Police did not pay enough heed to the case. Three days later, she was found brutally gang raped. Following the incident, the state police arrested eight out of nine accused. Reportedly, the ninth one committed suicide by poisoning himself. Amidst all this, the family members of the victim have criticized the entire process to be slow, inefficient and unyielding. This is again a question on the efficacy of the law and order system of the country. 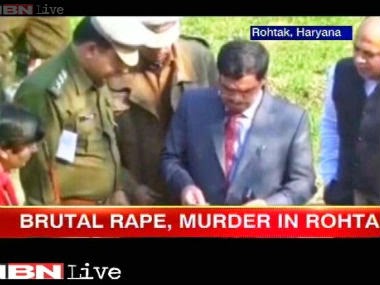 This incident leaves us with the same deep imprints as the Delhi gang rape did way back in 2012. The human rights violations have become the prerogative of the mail chauvinists, it seems. The number of crimes against women is ever increasing. The mentally challenged people are not even spared, as if the trials and tribulations in their lives were not big enough. It is to be noted that the laws dealing with sexual crimes have been subjected to an overhaul altogether but still, the rate is so high that the conditions of citizens especially, the vulnerable groups are deplorable. The crime patrolling might have increased in cities but the towns and villages are highly unsafe. The victims of sexual assault have very less chances of survival. Therefore, if in case, such a victim survives, she will be in a vegetative state in all the probabilities leading almost a devastated life. Moreover, the crime reporting takes a lot of time and the evidences go tampered by then because of the recklessness of the authorities. The government has, undoubtedly, the primary responsibility to uphold and preserve the human rights but the immediate unaffected or affected population will also have to participate in crime prevention. The security of the vulnerable groups should have become a major concern by now. The sentiments for the human rights protection specifically that of mentally challenged people should echo all across the nation.
Dereliction of duty by policemen is another factor which leads to the chaos created after a rape takes place. The laid back behavior of the policemen in such cases is rarely scrutinized, not much has been done to bring them back to their duties. It’s high time that the inherent problems among the police forces while dealing with sexual assault cases came under the scanner. One way to uphold moral standards in the nation would be to train and educate the common masses as well as the police about the sensitivity of the cases involving mentally challenged victims. People who blame womanhood itself as a cause for rape put across firmly that the women’s way of dressing up ‘provocatively’ makes them vulnerable to rapes. However, this argument evenly falls flat in the case of a mentally or physically challenged victim. The shunned victims’ social acceptance is another dimension to the existing problem. If you believe the male chauvinistic notions, treating women as commodities, in the hands of men is a seemingly ‘customary’ practice in India.
Rapes are just ‘ways’ of such an expression. In the instant case, it was not just violence perpetrated against a woman but it was also violence against a disabled, this can’t get even worse. This was inhumane in the highest order possible. Supposing, had she been alive even after the mishap, one would not have expected her to report the horrendous details to the Police. There is yet another key learning from the incident, the disabled women’s safety need additional attention in the country today. It goes without saying that lack of institutional protections for women especially the disabled women would cause such incidents again in the future. Drifting towards the legality pertaining to the issue, the United Nations has promulgated a convention prohibiting torture and inhuman or degrading treatment (1). Notably, India has signed but not ratified the instrument. Critically speaking, the enforcement of these treaties and conventions has never been an adequate and an effective one. There is a stark contrast between what is on paper and what the ground reality is. In an American case, the members of a football team in New Jersey raped a mentally handicapped girl with a broomstick and baseball. The long trial terminated in prison sentences for all the three victims holding them guilty of first degree aggravated sexual assault. The other two were convicted of minor conspiracy charges. It is not a prerequisite to recount and recall the myriad charters on human rights while combating the problem. The problem solving facet nor lies by looking only towards the west. The development concerning the rights of the mentally disabled is feebly traced in India. In order to obtain positive results in this regard, there is a need felt to chalk out a legally and socially nuanced policy aiming at fulfilling and catering to the special needs of such victims. At some places, there is even paucity of counselors, psychologists and mental health centers. The Supreme Court of India rightfully intervened in a catena of judgments regarding the administration and management of mental hospitals (2). In R C Narayan v State of Bihar (3), the honorable court ordered to remedy the defects existing in Ranchi mental asylum. Another inconsequential step would be to provide free medical and legal aid to the victims. The court has time and again interpreted the intention of the specific legislation for this purpose. In Chandigarh Administration v Unknown, the court held that the object of The Persons with Disabilities [Equal Opportunities, Protection of Rights and Full Participation] Act, 1995 is to spell out the responsibility of the State towards the prevention of disabilities, protection of rights, provision of medical care, education, training, employment and rehabilitation of the persons with disability and to create barrier free environment for them as well as to remove any discrimination against them in the sharing of development benefits. The appointment of guardian or a custodian is also in the interest of the victim, is a fact accepted by the judiciary itself. The positive discrimination enshrined in Article 14 of the Indian Constitution is to be applied and reflected while rendering justice to the mentally disabled victims of the crime. Such cases need to be addressed and disposed of with great precision and care- no qualms of doubt about it.
References:
1) Convention Against Torture and other Cruel, Inhuman or Degrading Treatment or Punishment, Dec. 10,1984,1465 V.N.T.S. 113

Aishwarya Dhakarey is a third year student at Symbiosis Law School, Pune. A keen and avid learner in life, she prefers to always associate herself with something really productive. Writing on diverse issues is her forte. She also loves to read extensively.