The Curious Case of Section 376 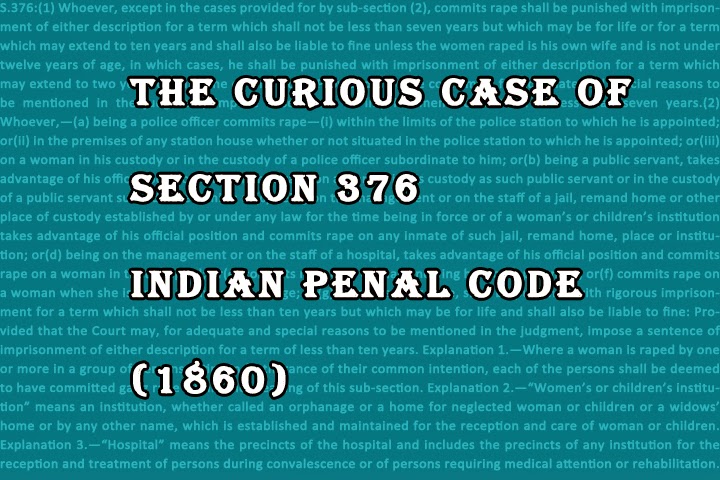 A six-month long survey conducted by leading newspaper The Hindu has brought to light startling
conclusions about the cases of rape recently brought before the Delhi courts.
The figures represent the stark reality: rape laws have recently been misused in Delhi.
METHODOLOGY
The Hindu conducted
an analysis of cases of sexual assault decided in Delhi’s six district course
with a view to discern a theme among them. Nearly 600 cases have been brought
before the Trial Courts in 2013. The
Hindu analyzed them and categorized them according to various factors
(outcome, victim’s nearness to the accused, age of the victim, judge’s
observation, etc.) The newspaper also conducted interviews of a motley crew of
judges, public prosecutors, police officers, lawyers, women’s right activists,
complainants and accused.  The
investigation, published in three parts (available here, here and here) lasted six months and brought to
light a nuanced picture of sexual assault in the capital.
THE NUMBERS

The Hindu’s
analysis revealed that of the 583 cases decided in the Trial Courts
(where the case first comes for trial), the largest percentage were of cases of
elopement, followed by instances of non-appearance of complainant, rapes by
neighbours and acquaintances, breach of promises of marriage, sexual assaults
by close relatives and strangers. 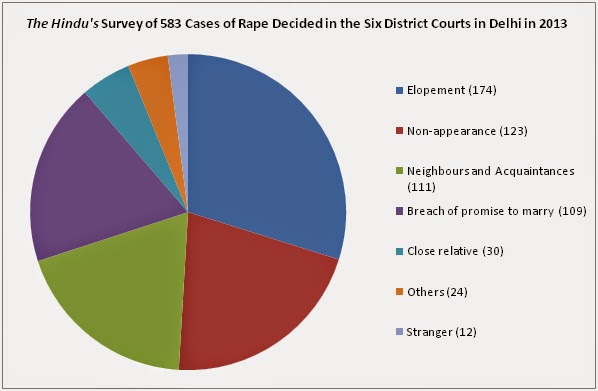 The survey reveals that 583 cases were decided by the six
District Courts of Delhi in 2013. Of the number of cases instituted, nearly 30%
involved elopement of the boy and girl, followed commonly by a complaint of
abduction and rape by the girl’s family. In nearly two-thirds of the 174 cases
of elopement, the woman insisted in her deposition before the police, doctors
and magistrates that she was in love with the accused and, in most cases, even
got married. They also complained that they had been subjected to repeated
beatings and threats by parents who even, at times, forced her to undergo
abortion. Not surprisingly, a large portion of these cases involved inter-caste
and inter-religious couples. It was further observed in 67 of 174 cases of
alleged elopement that the girl, though first admitting (either in the FIR,
medical examination or to the magistrate) that she eloped of her own volition,
subsequently turned against the accused. Noted lawyer and activist Seema Mishra
attributes the recantation to systematic brainwashing by the girl’s family.
Further, in 10 of the cases of alleged elopement, the intercourse though
consensual, resulted in ‘rape’ since the girl was found to be a minor.
21% CASES ARE FALSELY INSTITUTED

Next were the instances of ‘sexual assault’ where the
complaint turned out to be false. In 123 of the 583 cases, the accused was
acquitted since either the complainant went missing, stopped attending the
proceeding or went hostile. Many even alleged that they had filed the case on a
false complaint only to extract money or for property.  In two cases, the complainant claimed in her
deposition that she retracted on account of intervention by ‘community
members’.
BREACH OF PROMISE OF MARRIAGE CONSTITUTE 18%

The next chunk comprised cases of rape involving an alleged
breach of promise of marriage by the accused. In the 109 cases registered, it
is alleged that while the accused initially agreed to marry the complainant, he
subsequently refused to put his promise into effect. The complainant alleges
rape on account of her consent being vitiated by a false promise of marriage.
Only 12 of such complainants resulted in conviction. These were instances where
the accused was either already married or had conducted a fraudulent marriage
ceremony with the complainant.
NEARLY 27% CONSTITUTE RAPE THE WAY COMMONLY UNDERSTOOD

While in 111 of the 583 instituted cases, the complainant
alleged rape by the neighbour or an acquaintance of the complainant, in 30
cases, rape by a member of the family was complained. There were 12 instances
of rape by strangers and 9 that involved trafficking and prostitution. The Hindu found that among those
involving neighbours, nearly half could be characterized by a man in a slum
sexually assaulting his neighbour’s minor daughter by luring or forcibly taking
her to his house. Among rapes committed by immediate family members, it was
discovered that in almost all cases it was a young child who was subjected to
the crime. In rapes by strangers, the accused looked for the opportune moment
to prey on vulnerable women who were either homeless, had run away from their
home or was a child. The rapes belonging to this category are the ones commonly
understood by everyone. 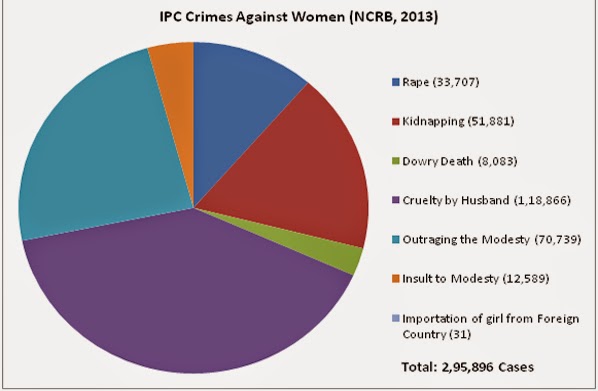 The numbers scarcely reveal the agony of the rape victim.
When considered closely, the numbers reveal the true picture of rape in the National
Capital. Let us attempt to look behind the numbers to understand better what
they mean.

The fact that nearly 30% of ‘rape’ cases involve complaint by
the girl’s family after the boy and girl elope together is symptomatic of a
larger malaise creeping deep within the society. The issue may be considered to
be twofold: One, of lack of freedom to choose one’s spouse and two, of the fear
among couples to be persecuted for their choices. Statistics reveal that, despite
belonging to an urban modern milieu, parents in Delhi seek special interest in
marriage of their children. Such an interest often takes the form of imposition
of their choices on the to-be bride/groom. An individual choice of their child to
select their partner is seen as an audacious act of effrontery by their
parents. The fear of repercussion drives the young couple to run-away from their
family. It is even more surprising that the city that boasts modern
infrastructure is dwelled by those who believe in the taboo of inter-caste and
inter-religious marriages.  The Hindu claims that a vast majority of
such cases were marked by a savage attitude of the girls’ parents who often
resorted to brutal violence against the couples. For the vengeful, section 376
thus becomes a tool to settle scores with the boy.
A TOOL TO DEFAME

Rape laws are also often seen to be misused by those who
aspire to only defame the accused. The complainant has an axe to grind with the
man. She files a complaint against him, ensures he gets harassed by the police
and is condemned by the society. Instead of complying with the due procedure of
law, she feels satisfied in the apparent pre-trial defamation of the man. In
123 cases, The Hindu reports, the
complainant often went missing or claimed she never alleged rape. While it’s
truly believable that her family has a major role to play in forcing her to
retract, it would be unwise to assume that rape laws aren’t being misused to
seek revenge. In May, 2013 Justice Kailash Kambhir of the Delhi High Court noted that rape laws are also being
used as “a weapon for vengeance and vendetta”. He clarified that
judges must “cautiously examine the intentions of the girl to find out
whether the rape complaint is genuine or has mala fide motives”
A FALSE PROMISE OF MARRIAGE

The other issue often seen in instances of rape is of the
alleged breach of a promise of marriage. The prosecution claims that the
accused, by promising to marry the girl, indulges in intercourse with her; her
consent thus being obtained on a promise. The consent gets vitiated as soon as
the man fails to fulfil his promise leading consequently to the offence of
rape. The issue must be understood by distinguishing between instances of breach
of promise and non-fulfillment of promise. In the former, the accused possesses
a sly motive and makes a false promise of marriage to the naive girl only to
indulge in intercourse. The intention of the accused is never to marry her but
to make a false gesture to obtain her consent covertly. The latter cases involve
the accused, though initially believing to fulfill his promise of marriage,
unable to do so afterwards for unforeseen reasons. While in the former case the
accused deserves to be severely punished, the latter deserves to be treated
differently. In Deepak Gulati v. State of Haryana (Criminal Appeal No.
2322 of 2010), the Supreme Court Bench recently noted that to convict a man of
rape “there must be adequate evidence to show that at the relevant time, i.e.,
at initial stage itself, the accused had no intention whatsoever, of keeping his
promise to marry the victim.” “The court must be assured of the fact that from
the very beginning, the accused had never really intended to marry her”,
Justice B.S Chauhan, while delivering the judgement, added. What could perhaps,
in addition to the intention of the accused, also be considered is the mental
constitution of the complainant. It would be difficult to believe the narrative
of an educated woman who possibly was well aware of her act and indulged in
sexual intercourse by reason of her love and not solely on the
misrepresentation made by the accused.
FIDUCIARY TREASON 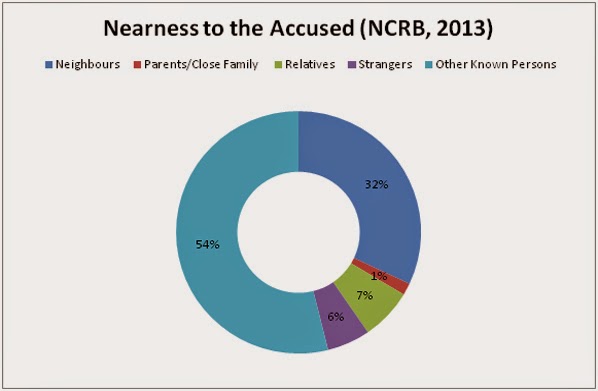 The cases of rape by close relatives, acquaintances and
neighbours reveal a sordid reality: those in a fiduciary relationship are
exploiting the trust entrusted in them. The National Crime Record Bureau (NCRB)
further notes that of 33,707 instances of rape registered in 2013 in India,
31,807 cases involved rape by someone known to the victim. Instances of
incestual rapes too are on a rise with 536 recorded cases. The report by NCRB,
titled “Crime in India 2013” further highlights that in 33.9% of cases the accused
was a neighbour. Imagine the agony of a young girl subjected to sexual
exploitation by someone who she fondly called ‘uncle’ and in few cases even
‘brother’ or ‘father’. How would she feel in having to share the same hearth
with her assailant? Instances are not rare where the victim is subjugated and enslaved
for months. It is this category of crimes that deserve the harshest of
punishments.

DEFEATING THE CAUSE OF WOMEN’S RIGHTS
By misusing laws that are aimed at ensuring protection of
women, the wrongdoers are committing a huge disservice to the cause of women.
The Indian judiciary is already reeling under a colossal amount of pending
cases. Filing baseless cases not only ensures that the real perpetrator of
crime goes scot-free but also creates prejudice among judges against genuine
victims. If the poor conviction rate of 24% for rape in India is anything to go
by, misuse of rape laws would act as the final nail in the coffin of women
justice.

The Hindu’s survey is limited in geography to Delhi. Instances of
sexual violence occur routinely in all parts of the country. Also, the survey
is a quantitative analysis of cases that reached their conclusion or were
dismissed due to non-appearance. Instances are not rare where the girl is
prohibited to file an FIR, the case is dismissed in limine for lack of evidence or the case never reaches its
conclusion. To make hasty judgements on the basis of only this data would be
foolhardy. 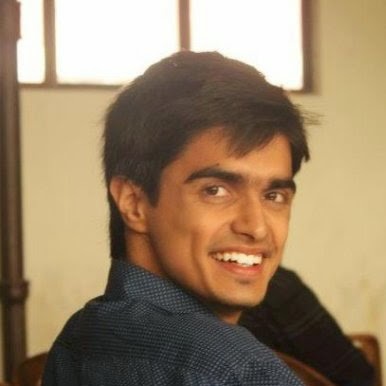 Anmol Vashisht is Assistant-Editor at ‘For the Sake of Argument’. He regularly writes on contemporary issues of politics, law and international affairs. As a budding lawyer, he hopes to change the system: one article at a time.

« How To Research: Confessions Of A Research-holic.
Getting Linked on LinkedIn »