admin 14th June 2014 Uniform Civil Code: The “Great Divide” Analysis.2017-08-15T11:41:33+00:00 Law & Policy No Comment
The Constitution of India came into force in 1950. Since then, there has emerged a fierce debate regarding the implementation of various directive principles mentioned in part IV of the Constitution and their relationship with respect to various fundamental rights. Among these directive principles, Article 44 is that one such article which has been a real bone of contention for decades. This article provides for a uniform civil code for the citizens and states that “the state shall endeavor to secure for the citizen a uniform civil code”. There was a great uproar in the constituent assembly as to whether Article 44 shall be drafted or not. Political stalwarts like Minoo Masani, Hansa Mehta, B.R. Ambedkar and K.M. Munshi asserted for a uniform civil code which would hold precedence over the personal civil laws of various religious communities. This was mainly opposed by Muslim and Christian members of the constituent assembly.
There are supporters of this code, which consists of mainly feminists, Hindu fundamentalists and liberal thinkers. They claim that a uniform civil code would overcome the particular and often reactionary aspects of personal laws of various religious communities which tend to create ambiguities regarding issues such as marriage. This would in turn lead to modernization of society, social upliftment and rise in the status of women and children. According to them the absence of Uniform Civil Code gives rise to a situation where you can see vestiges of backwardness in the society. For Liberal thinkers, these personal laws show a colonial attitude which was marked by appeasing various communities, hence linking them to the current political scenario where the politics of appeasement has gained prominence over the interests of citizens. They refute the criticism against Uniform Civil Code which is based on the assertion that it will clash with article 25. They say that objectives contained in article 44 by no means want to offend religious freedom of faith and undermine the clauses of article 25. To drive home the point they give the example of sub clause b of clause 2 of article 25 which provides an exception to the effect that any existing or future laws providing or the social welfare and reform shall not be affected by the operation of this article.  They also point out to the fact that due to the non-enforcement of a uniform civil code, article 14 and article 18 are violated which provides for right of equality and prohibition of discrimination on the grounds of sex and religion. Much of their criticism is directed towards Muslim personal laws, which according to them is highly unjust to Muslim women as was seen in the Shah Bano case (Mohd. Ahmed Khan v. Shah Bano Begum, 1985 SCR (3) 844.). They quash the misapprehension around the issue of bigamy in Islam by giving examples of countries like Syria, Tunisia, Morocco, Iran, etc. where the practise of polygamy has been either totally prohibited or severely curtailed to check the misuse and abuse of this obnoxious practise. In addition to this there are Hindu fundamentalists who are seeking retributive justice and assert that since the personal laws of Hindus had been codified in 1955 by the Hindu code bill, despite the fact that within Hinduism, there exists a variety of subcultures, same should be done with the personal laws of Muslims. 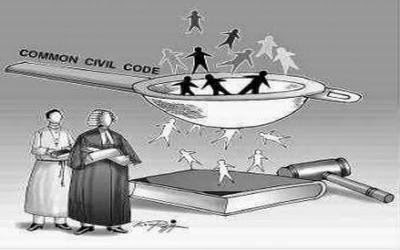 It is now more than half a century, since article 44 was incorporated as one of the directive principles in the Indian constitution. But successive government have not shown the required will to enact a uniform civil code, despite many judgments given by the Supreme Court favoring the implementation of it. Though, off and on, the need for a uniform civil code is debated with both its supporters and detractors locking horns with each other, ultimately nothing happens and the matter is left aside so as it could gather a little dust. Many political theorists and constitutional expert who criticise uniform civil code assert that Article 44 appears to be in direct confrontation with article 25 of the constitution which is a fundamental right. Article 25 states that: “Subject to public order, morality and health and to the other provisions of this Part, all persons are equally entitled to freedom of conscience and the right freely to profess, practise and propagate religion.” They also postulate that there is a lot of diversity and dogmatic zeal attached with the personal laws of different communities, which won’t allow uniformity of any sort. They also remark that there would be dominance of values of particular religion which would be highly detrimental to the interests of the minorities. This according to them makes the proposition of a uniform civil code highly unacceptable and impractical. In addition to these theorists are the Muslim Ulemas, who join them in taking pot-shots at Article 44. According to them if reforms need to be there, then it has to be within the personal laws of that community. They claim that the Muslim community is an educationally and economically backward community and if the government is really interested in bringing equality then it should work on these fields rather than focusing on the issue of uniform civil code. Further, for them it is very difficult to disregard the Sharia law which is an integral part of Islam. The foremost argument is put forward by All India Muslim Personal Law Board (AIMPLB) in this regard who assert that implementation of a uniform civil code would deprive Muslim community of their freedom regarding the practise of specific customs like Bigamy and unilateral divorce leading to curtailment of their fundamental right to practise religion.
Examining both the sides of the argument, makes us feel that this situation is an insolvable one. Puzzling it is, but not insolvable. A little dexterity in approach is needed to solve this intractable situation. The Indian constitution envisages a secular state by guaranteeing religious freedom to all the communities. The respect for various religions that our constitution holds is not just governed by laws and rules, but by a certain bigger ideal, even though this respect and religious freedom is subject to certain limitations. The main thing that we have to understand here is that Indian secularism runs deep within the conventions governing the constitution, and there is a philosophy of coexistence of various religions attached with it. To strengthen this philosophy, the support of two powerful factors are necessary – a higher degree of tolerance by all religious sects and strict adherence by all the concerned to the principles of equality and non-discrimination, which are the cornerstone of our constitutional edifice. This philosophy won’t be compromised by the mere implementation of uniform civil code. But uniform civil code can certainly solve many issues and give a boost to the two powerful factors mentioned above. Though initially there would be a lot of discontentment among various religious communities, but with the passage of time it can certainly help us to shift our focus from religious issues to more pertinent issues affecting the society at large such as poverty, child undernourishment, etc. Here the role of the state should be brought to limelight. In pursuance of the goal of secularism, the state must surely act as a cohesive force and not act as to bring discord among the various religious communities. Indian state has from time immemorial lacked the will to act and has shown only its softer side. This is because our politicians who have the control over the state machinery are guided by mainly sectarian concerns and not by national interests, example being the non-implementation of the Uniform Civil Code which can be such a good tool for national harmony. It is also very interesting to examine the background of various critics and the nature of their criticism. Most of these critics are the people who benefit from this status-quo. The criticisms that they shower against the Uniform Civil Code, although are buttered heavily by the notions of human freedom have a heavy parochial underpinning attached to it. For people like Ulemas, and Hindu Sadhus, the status of their community is the last thing in their minds. These so called religious ‘scholars’ have double standards and have reinterpreted personal laws so as to suit their own needs. It is due to this overall mind-set created by these religious heads and politicians that people of ‘lesser gods’ suffers.

People assert that implementation of Article 44 would be going ‘beyond the limits’ as it proposes to bring in uniformity. They assert that equality should be brought in and hence the focus should be on reforming the personal laws from within. This statement is inherently flawed as most of the civil codes are already same in most of the religions and hence uniform civil code can be made into a middle path if we implement it though a slow and steady approach. Further, Uniform Civil Code doesn’t propose to scrap all the freedoms of various religious groups. It tries to bring a certain degree of uniformity becomes of necessity to improve the overall social fabric of our country. Examples of other countries can be taken in this regard which have implemented a uniform civil code in their respective countries. True is the fact that religion is a sentimental and a sacred issue in India, but it is high time that government take some concrete steps rather than just toying with the issue. Article 44 is a constitutional ideal which has a just motive in contrary to what its critics make it to be. It is sad that parliament has done nothing for the implementation of article 44 despite repeated progressive judicial announcements. B.R. Ambedkar once said that “the parliament should have the liberty to encroach upon the religious domain in order to reform our social system, which is so full of inequities, discriminations and other things, which conflict with our fundamental rights.” Sadly this assertion cannot be made a reality in a country where a step towards social welfare is always considered as an ‘extreme step’.

This article has been written by our Campus Correspondent, Pravesh Aggarwal, who is a first year student of RGNLU Punjab.

« To Make A Difference: Interview With Riddhima Sharma, Executive Director of Model Governance Foundation
For a Better Tomorrow: Interview With Laavnaya Kaushik, Founder of NGO, Folks & Us »