Sourya Banerjee 10th May 2014 Voting Trend In Metros:- Why Mumbai. Bangalore & Hyderabad Voted Less.2017-08-15T11:47:04+00:00 Editors Pick, National No Comment
It is said that one of the major problems that India suffers from is its uneducated population spread across a vast area in its numerous villages. However, the recent Lok Sabha elections seem to show that these uneducated villages are aware of their rights and, also have a far higher sense of responsibility than the educated population of some of our Metros.

Almost the entire India has already voted, with the 8th and the penultimate phase of elections having already concluded. And the voting percentage has also increased almost everywhere in India (some places showing a dramatic increase). The experts are calling this a rare occurrence, Hyderabad with a voter turnout of approximately 53%, Bangalore with a turnout of approximately 55% and Mumbai with an approximate turnout of 54%, have left parts of the country and candidates shocked and dismayed at their low voter turnout during these elections.  And this is after the immense voter awareness campaign by not only the Election Commission of India, but also by numerous NGOs and Social Help organizations.  Accepted that voter turnout in all these three places have traditionally been low, despite this fact, the biggest obstruction to voting must have only been traffic jams and the summer heat. But for an election in which the Election Commission had got close to a million first time voters registered in all of these cities combined and had claimed that due to their awareness drives voting percentage in Hyderabad would at least touch 75%; this is disappointing to say the least.
Noting all these factors, it would be foolhardy to claim that awareness of rights as the problem in these three places. Like previously stated, voter safety problems also cannot be claimed, because voting in Mumbai, Bangalore and Hyderabad are far more safer than voting in remote villages of Jharkhand withstanding the threat of Maoists or voting in Srinagar, disregarding threats of anti-nationalists; these are places where voting percentage has improved, though marginally (considering their locations and conditions). The claim that many people in Bangalore are making, that a long vacation before elections were indirectly responsible for this turnout, be considered seriously. Hence the important question we are left with is what great factor, which no one could foresee, caused this to happen in few of the most developed places in India.
On comparing Hyderabad, Bangalore and Mumbai, there are some similarities which emerge.   All three have major IT industry presence. All of the three cities consist of a majority middle class, business oriented people. All of these places have a more than a decent number of first time voters; and all three cities are filled with young, ambitious, working professionals who are well aware of what they want. 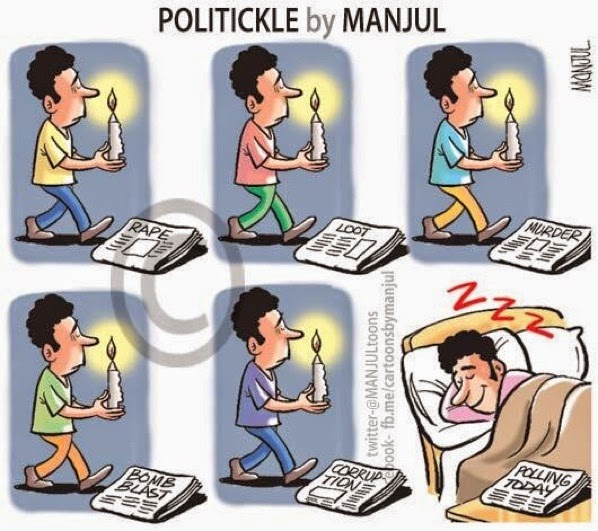 Keeping all these factors in mind, only two logical conclusions can be drawn regarding why these places voted less compared to the rest of India.

Keeping all previous performances aside, the current generation is the most politically aware and involved generation till date. If voters of Hyderabad, Mumbai and Bangalore want themselves to be taken seriously and actually want to bring about a change in our country, then complaining on Facebook and forgetting about it later, when they go club hopping isn’t going to get it done.  The most important change required is the need to install a sense of duty in the citizens and the feeling that every single vote counts.  A feeling that they must vote, not only for themselves, but for the betterment of the entire country and in every single election, irrespective of what agenda the political parties raise, concerns them directly.
This Article Is Written By Sourya Banerjee of Faculty of Law, IFHE, Hyderabad.
Special thanks to Miss Riddhima Sharma of KC Law College for her valuable inputs.

« Interview With Falakyar Askari: Using LAW for the society
Inc 42: Answer To Life, The Universe & Everything Related To Start-Ups. »