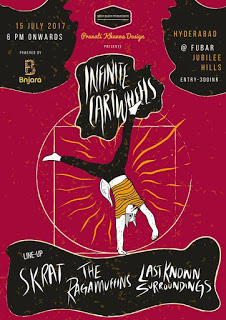 Carnival typically involves a public celebration and/or parade combining some elements of a circus, masks, and a public street party. People wear masks and costumes during many such celebrations, allowing them to lose their everyday individuality and experience a heightened sense of social unity.
Neon Black Productions and Infinite Cartwheels Hyderabad are organizing Hyderabad’s first ever Carnival Music Festival, called the Infinite Cartwheels, on the 15th of July, 2017. 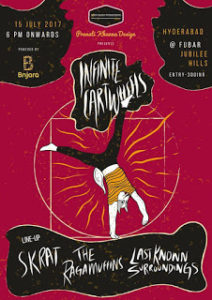 Having headlined stages like NH7 and CAD, Skrat is a 3 member powerhouse hailing from Chennai whose members individually play for already established acts like Jhanu, the movie score band who have scored for Rajnikanth’s movies, Sapta, the drum-electronic duo, etc.
This would be Skrat’s second time in Hyderabad after NH7 Hyderabad!
Listen to them here

Currently, the biggest band hailing from Hyderabad, the Ragamuffins will make their debut at the gig after a 4-month hiatus. They have played shows like the Red Bull Tour bus, NH7 Weekender, etc.
Listen to them here

Last Known Surroundings:
Currently based in Australia, LKS is a one man project turned into a band. They are post-rock oriented and have been the primary and sole post-rock band in Hyderabad for years.

Listen to them here

The Event shall also include multiple pre-show games including Air Guitar Competitions would goodies ranging from a free beer to an entire bottle of free Whiskey on the line! There shall also be a “BackYard Sale” where patrons can put up anything from an old guitar to an old hoodie for sale! 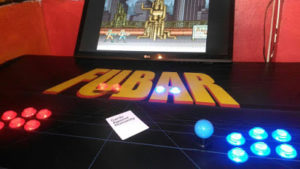 The Event will take place at FUBar Live Jubilee Hills, Hyderabad and is powered by Bnjara and would be covered by Arguendo!
For more details and Tickets check HERE
For an opportunity to win free entry passes email shredder.india@gmail.com