To Protect Divine Feelings: A Look Into Section 295A of Indian Penal Code

Sourya Banerjee 31st October 2016 To Protect Divine Feelings: A Look Into Section 295A of Indian Penal Code2017-08-15T11:34:36+00:00 Law & Policy No Comment
“Blasphemy is the crime of not taking someone’s beliefs as seriously as they do.”
― Jasper Sole
Section 295A of the Indian Penal Code (‘IPC’) is India’s
closest correlation to ‘law against blasphemy’. Any speech, writings, or signs
which have “deliberate and malicious intention” to insult the religion or the
religious beliefs of any class of citizens would constitute an offence under
this Section of the IPC.
Initially, this Section did not feature in the IPC. It was
only after an outrage of the Muslim community on publication of a pamphlet
Rangila Rasula by Mahashe Rajpal criticising the personal life of Prophet Mohammed,
wherein Rajpal was booked under Section 153A of the IPC.  The Lahore High Court, reversing the
conviction passed by the Trial Court, decreed Rajpal not guilty. This was met
with great resentment by the Muslim community, ultimately leading the erstwhile
British Governor of Punjab, Sir Malcolm Hailey to assure the Muslim community
that the penal code would see an amendment to that effect, failing which would
lead to endless discord. It was under these circumstances that the draft
Section 295A made its way into the National Assembly.
This section has been reproduced herebelow;
“295A.
Deliberate and malicious acts, intended to outrage religious feelings of any
class by insulting its religion or religious beliefs.—Whoever, with deliberate and malicious
intention of outraging the religious feelings of any classof citizens of India,
by words, either spoken or written, or by signs or by visible representations
or otherwise, insults or attempts to insult the religion or the religious
beliefs of that class, shall be punished with imprisonment of either
description for a term which may extend to three years, or with fine, or with
both.”
The Section expressly operates on the requirement of a “deliberate and malicious intention”along
with the act of such representation, illustration, impersonation, etc. An
attempt to defile religious sentiments should be marked with malice and tainted
with spite to attract the wrath of 295A. However, this is too subjective a
consideration and cannot be the end all determinant to accuse anyone of deliberately
attempting to outrage the sentiments of any religious community. To this end,
it can be suggested that this provision runs the risk of being misused to the
effect that a harmless satire might be taken in the wrong light and the origin
of the harmless joke suddenly comes under the strict scanner of religious
fanaticism. If such a rule exists, there should be a way to invoke it. Even
though the concept of eggshell skull is present in tort law, criminal law also
uses a similar doctrine which entails that facility of an injured person cannot
be a defense. But, unfortunately presence of section 295A IPC in our penal code
have attracted unwanted attention and a few section of the people has used the
section to their advantage. It is beyond any doubt, that  different person(s) will have different
tolerance levels, yet there should be a minimal threshold to hold which of
these random feelings of being outraged is so frivolous that they need not be
acted upon.
In this context, it shall be worthwhile to iterate the
latest incident where in section 295A was invoked is the Kiku Sharda incident.
Itlights the anomaly of this provision. Kiku
Sharda, an Indian comedian, and film and television actor, appeared
as Dera Sacha Sauda head Gurmeet Ram Rahim Singh in Zee
TV’s year-ender show Jashn-E-Ummeed, aired on December 27, 2015.  Repercussion of the act was that, someone in
Kaithal (a district in northwestern Haryana with one of
the lowest sex ratios in the country) took offence and filed a
complaint against Kiku Sharda in the Civil Lines Police station of the
district. The police jumped to action, sending a team to Mumbai, and
collaborating with the Mumbai Police. According to Vilas Chavan, Senior
Inspector in Aarey Police Station, Mumbai, the Haryana police team was lead by
Investigation Officer Sub-Inspector Ishwar Singh. “We only assisted the Haryana
police team in arresting the accused; investigations were entirely carried out
by them,” said Chavan.[1]
Not only this, after the Comedian-actor obtained bail from
the district court of Kaithal by furnishing an amount of 1 lacs, he was
arrested again and taken on protection warrant to Fatehabad, wherein he came to
know another FIR was registered alleging the same incident. 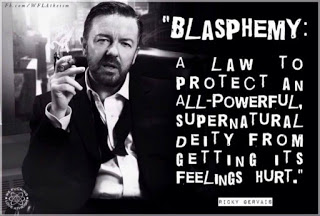 Ultimately the Comedian-actor had to approach the Hon’ble
High court of Punjab and Haryana for obtaining a stay on his arrest. The
Hon’ble P&H High Court had made it very clear that the actor would not be
arrested in an case arising out of the said controversy, alongside the bench
issued notice to the State of Harana and asked them to file a reply.
What is of pivotal importance is that, after all this, Dera
Chief Gurmeet Ram Rahim said: “if he has apologized, no complaint from my
side.”[2]
Section
295A IPC has since long caused unwanted arrests and malice to various people
for showcasing their personal opinion. We shall see a few of the past incidents
of which section 295A IPC is the root cause.
For instance, a Muslim  organization in Hyderabad filed a case at a
local court under this section, accusing tennis star SaniaMirza, her then
prospective husband Shoaib Malik, and his alleged former wife Ayesha Siddiqui
of misleading the community about their marriage and divorce proceedings —
thereby “hurting religious sentiments”.[3]
The legal battle over Taslima Nasreen’s autobiographical
novel Dwikhandita is a case on spot. In 2004, the West Bengal government issued
a notification, based on Section 295A, seeking a ban on the book on account of
its “deliberate and malicious intention of outraging the religious feelings of
Muslims in India and insult or attempt to insult religion and religious
beliefs”. The ban was challenged in Calcutta High Court by human rights
activist Sujato Bhadra.[4]
The Hon’ble High Court at Calcutta has held in the context
of the case titled as Sujato Bhadra v. State of West Bengal[5]
that section 295A IPC can only be attracted when insult or attempt to insult
the religion or religious belief are made with an intention, which must be
deliberate or has malicious intent, of outraging the religious feelings of a
class of citizens of India.
The High court at Calcutta after analyzing every aspect of
the book, held that section 295A IPC is inapplicable in the case.

LAW LAID DOWN BY THE SUPREME COURT
The
Apex Court, in plethora of judgements has held that for any person to commit
offence u/s 295A IPC, it is necessary to point out that the Act so committed
was of deliberate intention to cause malice.
In
Nand Kishore Singh v. State of Bihar[6],
it was held “It is well to recall that to come within the ambit of S. 295-A the
intent must be both malicious and deliberate.”
However,
in Ramji Lal Modi v. State of U.P.[7]  SC held section 295 A IPC to be
constitutional and not ultra vires and also laid down as to when section 295A
IPC can be attracted.
In
recent years, the attitude of the Courts changed towards offences u/s 295A IPC.
The Allahabad High Court, in Mudassir Ullah Khan v. State of U.P.[8]
held that,
“Mere allegation in
the complaint that the statement was deliberately made without any supporting
material to show that there was a deliberate and malicious intention to outrage
the religious feelings of any class of citizens of India or of any person would
not be sufficient to draw the proceedings under sections 295-A/298, IPC. The
malicious intention should either be shown to exist or should be apparent from
the nature of the act alleged to constitute an offense.”
CONCLUSION:
Legal experts contend that Section 295A and the right to
free speech are not necessarily mutually exclusive. “The intention to hurt
religious feelings requires a deliberate and malicious act. But a woman not
being allowed to touch the idol is an overtly discriminatory practice, and
should be unequivocally condemned,”[9]
says Shameek Sen, assistant professor, the West Bengal National University of
Juridical Sciences, Calcutta.
It is important to understand that
in todays’ era, freedom of speech and expression has gained pivotal importance.
Governments have to guarantee that freedom of expression as guaranteed by
Article 19(1)(a) of the Indian Constitution is not trampled upon when Section
295A is invoked. However, it may be noted here that even though Article 19
guarantees freedom of expression, there are reasonable restrictions on it if it
goes against the interest of the country’s integrity and sovereignty and public
order but such restriction should not be put as an impediment to every act or behavior
of such individual who are made the soft target of section 295A IPC.
To sum up, we can say that, the
section 295A IPC has been widely misused against various persons for political
reasons or otherwise and that it is a tool at the hands of some section of the
society to control few others,  It is
also seen that the doors of justice has been knocked for getting the valued
result. In 2015, veteran lawyer, Subramaniam Swamy has approached the Apex
Court, against the order of an Assam trial court issuing a non-bailable warrant
against him for failing to appear before it in a case of alleged hate speech.
Mr. Swamy has challenged the vires of Sections 153, 153A, 153B (dealing with
offence of rioting), 295A (outraging religious feelings), 298 (uttering words
with deliberate intent to wound the religious feelings) and 505 (making a
statement to cause incitement) of the IPC, all of which deal with the offences
popularly labelled as “hate speech”.
With
the daily increase of false accusations it is becoming difficult to mark a
distinction between the incitement or advocacy and the expression of opinion.
Nonetheless, in civil society, belief continues to be separated on Section 295A
and the ease with which it can be used to charge a person with having
“outraged” religious sentiments. Thus, the mandate of the day is to consider
the veracity and legality of Section 295A IPC and to rethink its presence in
our criminal legal system.
[1]
http://www.newslaundry.com/2016/01/13/kiku-shardas-arrest-how-our-laws-lend-legitimacy-to-such-idiocy/
[2]
said:
“if he has apologized, no complaint from my side.”
[3]
http://communalism.blogspot.in/2011/01/indias-section-295a-and-sabarimala.html
[4] ibid
[5]
2006 CrLJ 368
[6]
1985 CrLJ 797
[7]AIR
1957 SC 620
[8]2013
CrLJ 3741
[9]http://communalism.blogspot.in/2011/01/indias-section-295a-and-sabarimala.html

Kinnori Ghosh, a 2015 graduate of Gujarat National Law University, is currently enrolled with the Delhi Bar Council and is a member of the Delhi High Court Bar Association. Her area of practice include criminal law, matrimonial law and allied laws. She regularly appears before the Hon’ble Supreme Court of India, Hon’ble Delhi High Court and District Courts of Delhi and adjoining states. She has also appeared in the Saradha Chit scam matter before the Hon’ble High Court at Calcutta. At present she is working with the Chambers of Vikas Pahwa, Senior Advocate, New Delhi.

« From Battlefields to Brazil: A look into the Refugee Olympics Team
War Against the World: A Look Into the Environmental Impact of War. »