From Battlefields to Brazil: A look into the Refugee Olympics Team

Sourya Banerjee 7th August 2016 From Battlefields to Brazil: A look into the Refugee Olympics Team2017-08-08T14:04:29+00:00 Conflict Chronicles, Op Ed No Comment
“These refugees have no home, no team, no
flag, no national anthem,” International Olympic Committee president
Thomas Bach said when he announced the selected athletes last month.”
Rio Summer Olympics 2016 has already faced enough
flak and controversies – The country’s political instability, the fact that
Brazil’s government is on the verge of collapsing; Rio sure found itself amidst
a lot of problems. However, this year’s Olympics have something that has quite
possibly made history. Why? Well, The International Olympic Committee (IOC) has
handpicked a team of refugees giving them an opportunity to participate in the
Rio Olympics 2016.  The Refugee Olympic
Team (ROT) as it is called includes five athletes from South Sudan, two from
Syria, two from Democratic Republic of Congo and one from Ethiopia.  The team will compete under the Olympic flag
according to the decision of the International Olympic Committee to highlight
the plight of asylum seekers around the world. In March, International Olympic
Committee President Thomas Bach announced he would select refugee athletes to
compete as a team for the first time at the Rio Games amid a worldwide refugee
and migrant crisis. 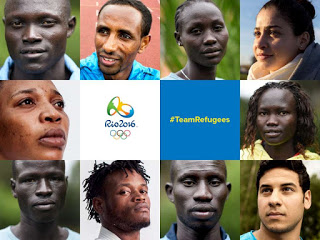 The team comprises of six men and four women,
who will compete in the sports of swimming, judo and athletics. Along with
Yusra Mardini and  Rami Anis from Syria,
both swimmers; runners Yiech Pur Biel, Paulo Amotun Lokoro, Anjelina Nadai
Lohalith, James Nyang Chiengjiek, and Rose Nathike Lokonyen (also the flag bearer),
all originally from South Sudan; judokas Yolande Bukasa Mabika and Popole
Misenga, originally from the DRC; and Yonas Kinde, a runner originally from
Ethiopia.
This year’s Olympics also houses a team from
Kosovo (still a part of Serbia) making its official debut with eight members
after the IOC recognized its bid for its independent status and a team from
Taiwan (also known as Chinese Taipei) is bringing in 59 members.
On August 6th, 2016, Yusra Mardini – a member
of the ROT won her heat in the 100-meter butterfly at the games. An admirable
feat although she did not make it through the semifinals, she will be competing
in the women’s freestyle on Wednesday.
But what needs to be addressed is that how
potentially problematic bringing in a refugee team is, because although the
refugee Olympic team represents the 65.5 million refugees and migrants around
the world, it also quite sadly represents the failure of the international
community by giving this long-term refugees a semi permanent status of the same
name instead of solving the refugee crisis. Sure, a refugee Olympic Team is a
step forward, but at the same time a step backward because the international
community has tagged this team as a special refugee team – questioning if this
will become an annual phenomena instead of helping these long-term refugees go
home. What the Olympic team ultimately represents is not the discipline, and
courage but the millions of people for whom the term refugee is now an
unfailing term. Maybe the point of a ROT is to inspire more government
officials/ politicians to let these refugees in their countries by showing
these refugees’ talents and in a way showcasing what a credit having these
refugees in their country is – the problem with this is that it’s a talent show
game happening here. Is this ROT a business tactic to show what these refugees
are worth so that the international community will let more refugees in? 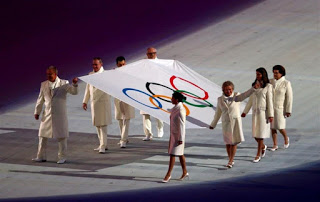 Or is it a ploy to distract from the ongoing
controversies in Rio? A ploy to gain sympathies from the international
community and subtly distract them from the seeming dance of a political samba
in Brazil?
The Refugee participants were already
practicing advanced level ‘games’ before being selected – Yusra escaped Syria
by swimming across the Aegan Sea with her sister. The South Sudanese
runners talk of childhoods seared by violence. Their athletic skills
became their survival ticket for them.
But one can only
hope that this media attention that the ROT is receiving is not just some short
lived attention forgotten in all the current events compilation of the year
-fading away in time but will hopefully prompt the world leaders in taking in
more refugees and sharing world responsibility – making the very essence of the
creation of this Olympic Team a success for refugees around the world.

« Untold Tales: These Happen Only In India
To Protect Divine Feelings: A Look Into Section 295A of Indian Penal Code »