The Crown’s Fancy: A Look into the Doctrine of Pleasure (Part- I)

Editorial Team 26th June 2016 The Crown’s Fancy: A Look into the Doctrine of Pleasure (Part- I)2017-08-15T11:35:22+00:00 Law & Policy No Comment
Introduction
The
‘Doctrine of Pleasure’ is a principle of the common law, the origins of which
may be traced back to the United Kingdom. The Doctrine of Pleasure is a special
prerogative of the British Crown. Similar provisions have been included in
the Constitution of India to protect the interest of civil servants as well as
ensure national security and look after public interest. The Doctrine of
Pleasure says that certain authorities hold office till he or she enjoys
the confidence of the President or the Governor. One exception to this Doctrine
is that it could be excluded by a Statute of the Parliament. The
rule in England was that a civil servant can hold his office during the pleasure
of the crown and the service will be terminated any time the crown wishes. The
same rule is applied in India.
This
doctrine talks of power to dismiss a Government servant at pleasure and is
subject to only those exceptions which are specified in the Constitution
itself.  Civil Servants are considered as the back bone of the
administration. In order to ensure the progress of the country it is essential
to protect civil servants from political and personal influence. So provisions
have been included in the Constitution of India to protect their interest in
order to ensure national security and public interest.
Before
understanding the meaning of ‘Doctrine of Pleasure’ in Indian
Context, let us first understand the genesis of this term. 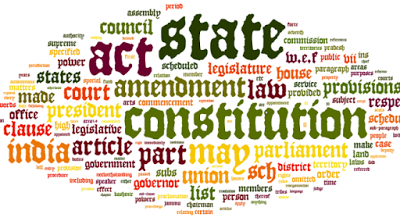 Doctrine of Pleasure- Meaning
This
Doctrine has its origin in the Common Law of England. The origin of
the Doctrine of Pleasure can be traced to a Latin Maxim durante
bene placito which means “during good pleasure” or “during the
pleasure of the appointer” as opposed to an office held dum bene se gesserit which means “during
good conduct”, also called quadiu se
bene gesserit (“as long as he shall behave himself well”).[1]
Black’s Dictionary defines ‘Pleasure Appointment’ as the assignment of someone
to employment that can be taken away at any time, with no requirement for
notice or hearing.[2]
It
was thus affirmed by the Court of Appeal in Dunn v. R[3]
that such rule had its origin in the Latin phrase “durante bene placito”
(“during good pleasure”), or “durante bene placito regis” (“during
good pleasure of the King”). It was held:
“… I take it that
persons employed as the petitioner was in the service of the Crown except in
cases where there is some statutory provision for a higher tenure of office,
are ordinarily engaged in the understanding that they hold their employment at
the pleasure of the Crown. So I think that there must be imported into the
contract for the employment of the petitioner, the term which is applicable to
civil servants in general, namely that the Crown may put an end to the
employment at its pleasure.
The
scope of the doctrine was further expanded upon in Shenton v. Smith[4],
where the Privy Council went as far as observing that the pleasure doctrine was
a ‘necessity’ because:
“The difficulty of
dismissing servants whose continuance in office is detrimental to the State
would, if it were necessary to prove some offence to the satisfaction of a
jury, be such as to seriously impede the working of the public service.”

« The Panama Pandemonium: The leak that shocked the World.
The Crowns’s Fancy: A Look into the Doctrine of Pleasure (Part-II) »