Editorial Team 24th July 2015 IPL Scandal Time Line & Overview: Mudgal & Lodha Committee Reports2017-08-15T11:37:24+00:00 Sports No Comment
Controversy thy name is Indian Premier League. The Indian Premier League since its inception has been the centre of controversies which seems to be a part and parcel of the IPL. It not only attracted a nationwide hype when the former Commissioner of IPL, Lalit Modi, faced as many as 22 charges of money laundering, but another reason for its being in the news is the 2013 scandal whose scores were  finally settled by the ‘Justice Lodha Committee’ this year. The IPL scandal of 2013, involved charges of betting and match fixing certain IPL matches, where the officials from Chennai SuperKings and Rajasthan Royals were found guilty. The IPL scandal dates back to May 16, 2013 when the Delhi Police arrested Rajasthan Royals players Srisanth, Ankit Chavan and Ajit Chandila in Mumbai for spot fixing. It also involved Vindoo Dara Singh who revealed that Gurunath Meiyappan’s and Raj Kundra’s involvement in the same.
Gurunath Meiyappan is a member of the AVM family and is the son-in-law of Indian industrialist, former president of the BCCI, and Chairman of the ICC, N. Srinivasan. Coincidentally, Mr. Srinivasan is also the owner of Chennai SuperKings. Raj Kundra is a British businessman, who also has interests in both cricket and mixed martial arts. He is married to Shilpa Shetty, the Bollywood actress.On May 25, 2013 Gurunath Meiyappan was arrested on the charges of betting, cheating and conspiracy and on 26 May, 2013 he was suspended by the BCCI. On the very same day the BCCI appointed a three member commissionto look into the case against Gurunath and Kundra. However, the Commission gave a verdict of ‘not guilty’ to Gurunath as well as Raj Kundra issuing a statement saying that there were no evidence against them that could prove any wrong doing on their part.The BCCI panel’s decision to let off Meiyappan and Kundra was challenged by the Cricket Association of Bihar secretary Aditya Verma in Bombay High Court and on July 28, Bombay High Court judges found the BCCI probe panel illegal and the report was declared null and void. On August 5, a Special Leave Petition was filed in Supreme Court challenging the Bombay High Court order by BCCI and on October 7, the apex court appointed a three-member committee, headed by former High Court Judge Mukul Mudgal. The panel was mandated to investigate but not impose any punishment. The Mudgal panel submitted its report to the Supreme Court on February 10, 2014 which said that Meiyappan was involved in betting and sharing team information and Kundra also participated in betting. The Supreme Court on January 22, 2015 set up the Lodha Committee, headed by the Ex Chief Justice of India, R M Lodha, to determine amount of punishment for Meiyappan, Kundra and their respective teams. The Lodha Committee was formed on January 22, 2015 comprising of retired Chief Justice of India R.M. Lodha and retired Supreme Court judges Ashok Bhan and R Raveendran to determine:
(i). Punishments for Gurunath, Kundra and their respective franchises Chennai SuperKings and Rajasthan Royals
(ii.) Suggest amendments to the process followed by the BCCI in order to prevent frauds and conflict of interests. 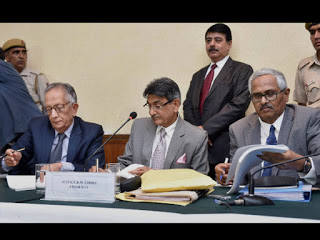 The Supreme Court committee proposed a two year ban on each Chennai Super Kings and Rajasthan Royals. Raj Kundra as well as Gurunath were banned for life from any cricketing activity. However, the players of both the franchises are not banned for the respective term and can play for any other team. The Committee gave the judgment on 22 July, 2015.
Following the judgment of the Lodha Committee, BCCI has constituted an IPL Working Group to study the verdict of the committee. The working group shall consist of four members including the IPL chairman Rajiv Shukla, BCCI secretary Anurag Thakur, BCCI treasurer Anirudh Choudhary and former Indian Cricket Team captain Saurav Ganguly. According to the twitter posts of the BCCI, the group will work within a time bound period of 6 weeks and report their recommendations.

« Raising Standards: Interview with Keshav Gupta, Co-Founder of The Dais.
Why You Shouldnt #dontMANcrimate »