Crypto Currency: The Rise Of Bitcoin

admin 26th March 2014 Crypto Currency: The Rise Of Bitcoin2017-08-15T11:48:30+00:00 Technology No Comment
The world is in financial disarray. With currencies falling and jobs being lost, the economy is going down the drain. Now just imagine if there was an entirely new economy- one that was designed specifically for the digital realm. That is the story behind bitcoin.

Bitcoin is a decentralized electronic cash system that uses peer to peer networking along with digital signature and cryptographics to generate currency. It means bitcoins can be transferred from person to person eliminating third parties i.e. banks. With the traditional money like the dollar and Euro there is always a central bank that issues currency and prints out cash as needed. But with bitcoins, they are generated using a process called data mining. Bitcoins are digged out of the system just like precious metals but digging is done only from a ‘mathematical mine’. A computer is given a complex mathematical problem and if the complex algorithm is solved, we get a block of bitcoins. The reason it is called mining is because there is a set number of bitcoins that can be mined from the system. Like gold, bitcoins are finite and capped at 21 million. And that is one of the greatest advantages of bitcoin. It is said that anything that we get too fast and in excess is always bad. Just like printing more money by the government doesn’t make its people any wealthier, it only leads to inflation. Bitcoins overcome this major problem faced by the current currencies today. It tends to have a self stabilizing effect on the economy. There are many other advantages to trading in bitcoins. It is safe and cheap (no transaction costs), untraceable and very easy to carry.
Bitcoin is changing the way people think about cash. As the influence is growing, many organizations and people have started to trade in bitcoins for example Wikileaks, WordPress, ebay etc. There are exchanges where bitcoins can be bought and sold using the local currency. Mt. Gox is the largest of those exchanges. Since bitcoins eliminate the intervention of any government body or bank, it can’t be regulated. It means it is also a currency that fuels what is known as the ‘dark web’ where buyers can hide their identities and use it to trade in illegal activities. 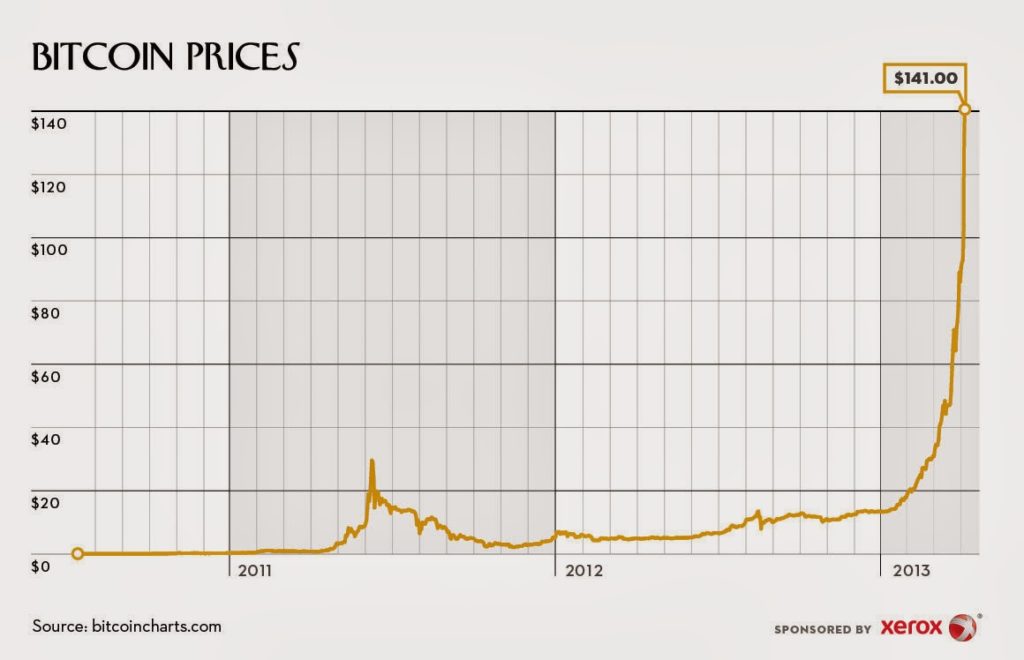 The term bitcoin was first mentioned in a research paper posted by Santoshi Nakomato in 2008. Initially, the value of a bitcoin would hardly even touch a dollar. In 2011, it rose to $8. A newspaper published a story about it on the popularity of bitcoins among online drug dealers after which, the value of this crypto-currency more than tripled. Since then, bitcoin has multiplied more than 5 folds in price crossing the 1000$ mark for 1 bitcoin in a month. Bitcoin was drawing attention of everyone in the technology business. As the value of bitcoins kept rising, mining became popular. This increased competition meant decreasing profits to everyone. People were willing to invest too much in bitcoins. Real money was at stake and many began to speculate. The investors started to think of themselves as the dotcom millionaires.
The only drawback of bitcoin, which led to its fall, is its storage. The unique code had to be saved somewhere. Initially, when only the geeks mined bitcoins, they stored it by default in computer wallets or on their desktop. But as the popularity of bitcoins rose and more and more people started mining it, safety of these wallets became a problem. People hacked into computers and stole the information. Mt. Gox, which handled 90% of all bitcoin exchange, was stolen from, driving their exchange rate to zero. The prices plummeted automatically. The true believers of bitcoin are happy because they believe that it is a good sign. Just like in the late 1990s, when the bubble burst, most of the dot com companies had gone bankrupt. There were few to survive like Amazon, Ebay and Google. Albeit, after a few years, when the frenzy over internet died, these companies went onto become the largest and richest dot com businesses in the world.
Currently there are over twelve million bitcoins in circulation with an approximate creation rate of 25 bitcoins every ten minutes. Every four years the creation rate is halved which means bitcoins can be mined for another 100 years or so.

« Bet on the Future: Why India Needs a Regulation on Betting
Food “Over” Security by Israel-A Critic. »